A New Film from the Director of AMERICAN MOVIE 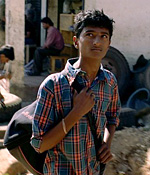 At first blush -- and okay, at a second, too -- The Pool seems like a radical departure for Chris Smith, the Milwaukee-based filmmaker known for offbeat documentaries like American Movie, Home Movie, and The Yes Men. For one, The Pool is a narrative film, his first since his no-budget debut American Job, which nonetheless had the feel of documentary verisimilitude. He also went halfway around the world to shoot in the West Indian state of Goa and in the Hindi language, and had the further audacity to cast non-professional actors in three of the four leading roles. And yet The Pool is still fundamentally a Chris Smith story, an expansion on his career-long interest in dreamers and outsiders who dwell on the fringes of society, but possess a certain audacity.

A poor, illiterate teenager from rural Goa, Venkatesh Chavan scrapes together an exceedingly meager income out of odd jobs, including working as a roomboy at a Panjim hotel and collaborating with his much younger buddy Jahangir Badshah on a side business selling plastic bags. From the branches of a tree, Chavan looks down at the shimmering majesty of a pool in a wealthy family's backyard and wonders why no one ever breaks its placid surface. He starts following the pool's owners -- a father (Nana Patekar) obsessed with his garden and his daughter (Ayesha Mohan), a pretty sophisticate who reads a lot -- and eventually he develops a relationship with them. The father gives him another odd job in the garden, and the initially disinterested daughter goes off on little adventures with Chavan and Badshah.

The premise sets up a stark contrast in class: What could be a more obvious border between the haves and the have-nots than a gate separating a ragamuffin from the non-pool-using elite? But Smith never brings the hammer down hard, and he quietly defies any assumptions about the privileged people Chavan encounters. The Pool doesn't seethe with class tension -- or much tension at all, for that matter. It's a funny, sweet-natured humanist character piece that looks beyond such distinctions without entirely transcending them. Based on a short story by Randy Russell, who co-scripted with Smith, the film has a refreshing sense of proportion without seeming as determinedly minor or mannered as other indies. It's a vivid piece of sketchwork.