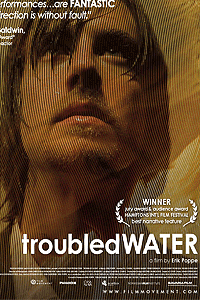 A seemingly classic redemption story, Troubled Water follows the character of Thomas (Sverre Valheim Hagen), who serves an eight year prison term for the murder of a young boy. We witness the halting, awkward steps Thomas takes to set his life back on track: first a job, then an apartment, and finally, a chance at love, happiness, forgiveness. Until his secret is inevitably revealed. What is unusual about Troubled Water is in the details. Thomas finds work as an organist at a Catholic church. The woman (Ellen Dorrit Petersen) he loves is not only the priest at this church; she is also the single mother of a young, blond son who eerily resembles the child Thomas killed.

The intensity level of Troubled Water runs sky high. The story is small in scope, focusing on a handful of people whose lives are ripped apart by a lost youth's mindless crime. For this cast of characters, however, the entire world is no bigger than this one story - and it is riveting. At the film's climax, the parallel stories of Thomas and the Agnes merge into the claustrophobic, impossible yet altogether believable space of an automobile. --Marcy Dermansky