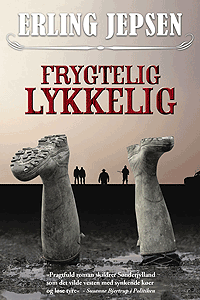 Audiences should find themselves terribly satisfied with TERRIBLY HAPPY (Frygtelig lykkelig), cowritten and directed by Danish filmmaker Henrik Ruben Genz. This is a dark and moody drama that often feels more like a thriller. The movie could be described as being a little bit BLUE VELVET and a lot BLOOD SIMPLE, but that wouldn’t do justice to the film having it’s own character, despite its influences.

Robert (Jakob Cedergren) is a cop from Copenhagen with a secret, which has landed him in a small rural town in Denmark. Robert is the town’s new Marshall. At first he finds himself an outsider, having difficulty fitting in and learning the ways of the locals, surrounded by bogs and mushy soggy ground everywhere he steps. It doesn’t take long before he meets Ingerlise (Lene Maria Christensen) who is married to the town bully Jorgen (Kim Bodnia). Ingerlise confides in Robert that her husband beats her repeatedly and, while Robert is tempted to intervene, he withholds judgment in an effort to better understand the situation.

This situation, as Robert quickly comes to understand, is a tricky and potentially dangerous one that involved the entire town. This is a town where the locals prefer to take care of things themselves, choosing not to involve outsiders. As Robert begins to slowly piece together the dark truth of how this town functions, he is also slowly drawn into the complicated mind of Ingerlise, who may not be playing with a full deck of cards. A deadly triangle of cat and mouse is sparked involving Robert, Jorgen and the town leadership after an accidental death occurs and Robert finds himself in a pickle that will forever change his life.

Right from the first frame of TERRIBLY HAPPY, I found that this was going to be an enjoyable film. Regarding my earlier comparison to BLOOD SIMPLE, this film has shown so much influence from the Coen Brothers’ body of work that I find it difficult to believe the influence isn’t real. This is not a bad thing, in fact, Genz has brilliantly tapped into the relatively unique styling of the Coen Brothers and made it his own.

TERRIBLY HAPPY is, in many ways, structurally and visually similar to BLOOD SIMPLE. This is a film noir story, set outside of a major city, that primarily involves two men and a woman in a dangerous love triangle. The cinematography sets a dark and moody atmosphere and the visual storytelling is illustrative of a filmmaker who udnerstand the power of a carefully selected shot or framing to further enhance what is happening on screen without pulling the audience out of the story.

While far less of an influence, David Lynch’s BLUE VELVET comes clearly to mind, especially as Robert begins to understand there’s just something not right about Ingerlise. Much in the same way Isabella Rossellini seduced Kyle MacLachlan into her web, only to find that he’s pout his own life in danger from the psychotic Dennis Hopper, Ingerlise has drawn Robert far enough into her web that he may never escape the spider’s den. However, in this the case the spider isn’t Jorgen, it’s the town itself.

Aside from the absolutely stellar and particularly creepy performances of the entire cast, it’s the atmosphere created within this film that resonates in collaboration with a solid story. TERRIBLY HAPPY is a suspenseful mystery, emphatically made more exciting by it’s score from Kaare Bjerkø, a body of music that also rings of an influence from the Coen Brothers’ films, who often employed the very talented Carter Burwell.

There is so much tactile depth to TERRIBLY HAPPY that I wanted to dive back in after completing the film. As I watched the film, I felt uneasy whenever Robert uncovered something or felldeeper into the town rabbit hole. I felt his anxiety about his past and the fear the hid just beneath the surface, generated by his complete disorientation regarding his own future. Jorgen became a character with virtually no emotion of his own, making him all the more frightening. Ingerlise is an enigmatic and bi-polar puzzle that Robert desperately wants to solve, but will he do so before it’s too late?

TERRIBLY HAPPY is a tightly-knit film, full-bodied and rich with character development and quality writing. If there’s nothing else I can say to describe how well this film works, I’ll simply say that I am now eager to view some of Genz’s previous work, although this may possibly be easier said than done. Fans of movies that offer mystery and suspense should not go hesitantly into this film. I highly recommend this movie to anyone who enjoyed films such as RED ROCK WEST, BLOOD SIMPLE or BLUE VELVET.

— Travis, We Are Movie Geeks