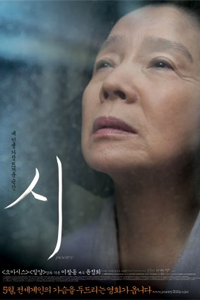 Acclaimed Korean director-writer Lee Chang-dong ("Secret Sunshine"/"Peppermint Candy"/"Green Fish"), one of the world's best young filmmakers, films a simple but engaging moralistic tale about male violence that spins its wheels over the everyday problems of ordinary people, as in its higher aim it gets to the heart of poetry with much affection, wit and intelligence. The key to the story is in its perceptive conveyance of how to approach poetry (or on how to watch films) by learning to see things fully. To get to that point of discovery Chang-dong must cover the following twisty paths: suicide, aging, love of nature, rape, honor, Alzheimer's, loneliness and money problems. By learning how to observe such varied subjects with Buddha-like intensity, it's Chang-dong's hope that the film's unsentimental heroine will be able to explore her inner beauty to free herself to discover the eternal.

The 66-year-old Mija (Jeong-hee Yoon), who prides herself on remaining elegant despite her life hardships, lives in a small town, just outside of Seoul, where she subsides on government assistance and part-time work as a caretaker/maid to the physically handicapped stroke victim Kang (Hira Kim). For an unexplained reason, Mija's divorced daughter's lazy teenage son Wook (Da-wit Lee) lives with her.

The pic opens with the suicide by drowning, in the river, of a 16-year-old girl who attended the same school as Wook. When Mija asks Wook about the girl, who lived with her widowed mom on a farm outside of town, she gets no response.

Mija is concerned she's forgetting things, and her local doctor sends her to the big hospital in Seoul for a check-up. There she learns, she's at the beginning stages of Alzheimer's.

When passing a poster advertizing for a beginner's literature class for adults at the Cultural Center, Mija enrolls because her high school teacher once commented that she will be a poet some day--a path she did not pursue. The poetry teacher (Yong-taek Kim) assigns the students the task of writing a poem at the end of the month long course, which seems an impossible assignment that Mija relentlessly pursues by listening carefully to her poet teacher's advice and paying more attention to seeing the things around her.

Bad news comes when the father of Kibum (Nae-sang Ahn), one of Wook's friends, informs Mija that the suicide girl said in her diary that for the last six months Wook and his five other friends repeatedly raped her and drove her to suicide. To get their sons off the hook from the law, they propose to offer the victim's grieving mom a generous compensation to hush things up. This settlement is encouraged by both the school and police as the best alternative to prevent a local scandal, but it must be done quickly before the public learns of the incident and demands legal justice.

On this world-weary journey Mija finds all the inspiration she needs to do the right thing, write her class poem and face up to her family loyalties. By patching together the story's brutal moments with its delicate flowery moments, this provocative pic creates a vivid poetical metaphor for observing the ways of the world.

It's a monumental achievement tackling such a daunting lyrical theme. I would think that only a few great living filmmakers such as Bong, Kore-eda, Sokurov, Oliveira and Kiarostami (and a few other artists I just didn't mention) can accomplish such a pressing work of art without ruining it with pretentious heavy-handedness. This curious, well-crafted, graceful film if attempted in the Hollywood system, would probably be a disaster.