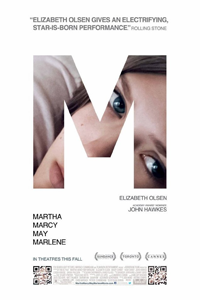 Ever since I heard it, I've had trouble remembering the title of Martha Marcy May Marlene. The movie? That's another story. Director Sean Durkin's debut feature brims with enough quiet tension to make it one of the year's most memorable movies.

Durkin, who also wrote the screenplay, tells the story of a young woman (Elizabeth Olsen) who escapes from a rural cult in upstate New York, but can't entirely shake off the experience.

On a deeper level, Martha Marcy May Marlene is a creepy mediation on the darker corners of identity. Just as Martha seems to juggle many identities -- some of her own choosing, some not -- the film, too, comes across as a kind of mix tape, finding its roots in both horror and psychological drama, genres that often are at their best when merged.

Olsen plays Martha, a young woman who, having fled a cult, shows up at the home of her sister Lucy (Sarah Paulson). It's immediately clear that Martha's presence will elevate tensions between Lucy and her architect husband (Hugh Dancy). Lucy feels responsible for her younger sister, even though she hasn't seen her in a couple of years.

This kind of movie -- ambiguous and haunting -- puts tremendous pressure on its lead actress, and Olsen handles it well. On one hand, we believe that she's had her fill of cult life; on the other, it's clear that Martha's life on the farm has toppled her ideas about personal boundaries and social convention. At one point, Martha pops into bed with her sister and her husband while they're making love. We eventually learn that in the cult, women are initiated by being drugged and raped by the cult's charismatic leader (John Hawkes).

Martha is constantly flashing back to her experiences in the cult. We know enough about other cults -- the Manson family, for example -- to fear that terrible violence lurks among cult members who are committed to defending their isolated way of life, which offers an indigestible mix of puritanical rigor (the men and women eat separately) and perversion (the women are offered to the cult leader as if they were sacrifices to an earthly god).

Durkin leaves plenty of blanks for us to fill in. We speculate that Martha joined this cult because she felt displaced, and that, for a time, the cult provided her with a safe heaven, as well as with a sense of power.

We also wonder whether Martha is strong enough to escape the influences of Hawkes' Patrick, who knows how to cast a wicked spell. He keeps telling Martha that she's "a teacher and a leader," someone special.

Durkin builds additional tension by forcing us to wonder when the cult members will follow Martha -- who they call Marcy May -- into her sister's suburban home, which represents a lifestyle Martha seems to find as off-putting as that of the cult.

Durkin purposefully keeps us off balance: At times, we're not sure whether we're in the present or reliving a piece of Martha's past. This approach makes sense because Martha may not be sure, either, and the movie benefits from its unhinged sense of creepiness.

Martha never tells Lucy where she's been, and it strains credibility to think that Lucy waits until the picture nearly has concluded to suggest that Martha seek professional help.

But Durkin's ability to sustain a sense of dread more than compensates for a few plot holes, and Martha Marcy May Marlene stands as one of the year's more intriguing pictures, a portrait of a self-contained world that's suffocating the spirit of a young woman who doesn't know (and maybe never will) how she fits into the general scheme of things.