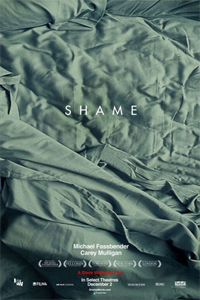 Though news of a film getting slapped with an NC-17 rating usually attracts media attention, most movie studios consider it a death sentence for the stigma of sleaze it carries, not to mention limiting the film's audience to strictly 18 and older. When it does happen, it's often a controversial and highly debatable decision, which is why so many studios offer to re-cut their films or, in the case of last year's "Blue Valentine," make a big stink and appeal the ruling.

When it comes to "Shame," director Steve McQueen's intense film about sex addiction, the NC-17 rating is entirely apt. The uncompromising director digs as deep and as dirty as is required to unflinchingly expose the nature of Brandon's (Michael Fassbender) addiction and, thus, his inner truths. The result, as you would imagine, is a film that's heavy on graphic sex and nudity. But that's not the newsworthy part. What makes this case particularly interesting is that the studio, Fox Searchlight, and McQueen didn't put up a fight or offer to re-cut the film. Instead they stood by the work and released it as what it is -- an intense portrait of out-of-control addiction -- a courageous move that could help rehabilitate the reputation of the naughty NC-17 rating.

Think about Sean Connery's James Bond sipping his "shaken, not stirred" martini. Sexy, right? Then consider Nicolas Cage in "Leaving Las Vegas," sloppily, desperately chugging vodka out of a bottle in a slow-motion suicide attempt. Suddenly, that tantalizing sip of liquor becomes something sickening, pathetic and deadly. The same holds true when the drug of choice is flesh, and McQueen presents Brandon's sexual exploits as a disturbing downward spiral of self-destruction -- nothing "sexy" about it.

When his sister Sissy (Carey Mulligan) shows up asking for a place to stay, Brandon's self-imposed isolation is seriously challenged. Though both siblings endured a traumatic childhood that is never clearly explained, the resulting wreckage manifested itself in entirely opposite ways. Brandon is cold, isolated, regimented and just barely able to contain his rage and self-loathing. Sissy is needy, sloppy with her emotions, and careless with her heart as she continually tempts the darkness of depression through unwise affairs. Sissy's sudden appearance in Brandon's carefully regulated world is the catalyst that begins to unravel it.

With five feature films released in 2011 alone, Fassbender is on the fast track to well-deserved superstardom. But when he's paired with McQueen, a renowned visual artist he first worked with on 2008's "Hunger," Fassbender is at his most intense, physical and even a little frightening. McQueen is a director who is less interested in story than in capturing the psychological depths and suffering of his characters. This is especially true in "Shame," which relies so heavily on Fassbender's fearless performance to convince a skeptical audience that a handsome, well-dressed man, who can seduce a woman on the subway with his hungry gaze alone, isn't a stud worthy of admiration, but a broken human being on the verge of implosion.