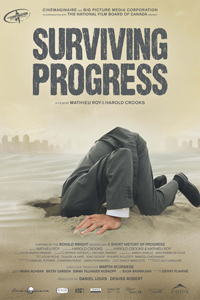 If you're still scratching your head and asking yourself what the Occupy Movement is all about, get yourself a ticket to the next screening of Montreal filmmakers Mathieu Roy and Harold Crooks' crucial, captivating and profoundly disturbing documentary feature, Surviving Progress.

The answers are all here, drawn with stunning clarity from Canadian author Ronald Wright's alarming book, A Short History of Progress -- an encapsulation of essays that formed the basis of his 2004 Massey lectures -- which suggest that human beings haven't evolved much past hunters and gatherers in 50,000 years of evolution and 5,000 years of civilization, and are ill equipped to cope with the effects of their obsession with progress for its own sake.

We have multiplied too fast. We want too much. We make too much. We take too much from the Earth. We move too fast. We embrace tools, technologies and processes that make our lives easier but threaten our very existence. We have put our future in the hands of a small and superwealthy few whose manifest concerns are the antithesis of the welfare of the species.

In the name of progress we have fallen time and again throughout history into deadly traps, as Wright and other talking heads point out in the film -- primatologist Jane Goodall, novelist Margaret Atwood, physicist Stephen Hawking, environmental scientist David Suzuki, biologist Craig Venter and environmentalist Vaclav Smil, among others -- that diminish our long-term prospects in favour of short-term benefits. We are no better than chimps who abandon complex puzzles that don't offer immediate rewards.

And now we're in a fix that director Roy -- who was mentored during the six years it took to make this film by executive producer Martin Scorsese -- and New York-based writer Crooks (The Corporation) conclude is beyond our ability to either comprehend or mend without some miraculous event, revelation or socio-political upheaval that will alter the progressive instinct in humans, either by collective will or (gasp!) genetic modification.

This is heady stuff, but Roy and Crooks stop short of suggesting we turn out the lights and prepare for the end.

Though they offer jaw-dropping visual and first-witness evidence of our folly -- massive deforestation in Brazil, the secret machinations of an insensate and rapacious Wall Street elite that has led the global economy to the brink of collapse, the embrace of capitalism in China, whose 1.3 billion inhabitants are just beginning to have the wherewithal, and urge, to consume like Westerners have for the past 200 years -- they do leave a couple of doors open to hope.

Hawking suggests we'll find new homes on other planets, sooner rather than later. Venter, who decoded the human genome, believes we'll find a sustainable alternative to fossil fuels in the nick of time.

Elsewhere in the movie it's suggested that we're already in the early stages of the development of a more compassionate system of government and self-regulation than the combative and destructive alternatives that are proven failures: capitalism and communism.

Even so, not all the experts are so sanguine and the overwhelming sense of urgency conveyed in Surviving Progress is its greatest achievement. In the tradition of the best "issue docs" of recent times -- The Corporation, Manufacturing Consent, Inside Job -- this economically crafted, exquisitely argued essay makes its disquieting case without hysteria or prejudice, without irony or jingoism, and with just a soupçon of self-loathing.

It's a credit to Canada's taxpayer-supported National Film Board that such an essential and vital documentary as Surviving Progress -- and The Corporation before it -- was given the necessary resources to reach a world in need of information so powerful and empowering.

It's hard to imagine who else would have backed a movie with so strong a stench of bitter truth and so compelling a reason to be seen.