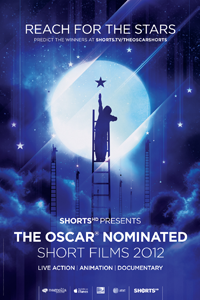 When Damian is forced to serve as an altar boy at an important mass in his local parish, he faces a difficult choice: conform to the status quo, or serve an extended ban from his life’s passion – football.

After 25 years in exile, Jim Mahon (Ciaran Hinds) returns to Ireland to show his American daughter Patty (Kerry Condon) his Belfast roots. But things don’t go as planned when she learns of a secret love triangle and a long lost best friend, Paddy (Conleth Hill). Their reconciliation leads to hilarious confusion. Directed by two time Oscar nominee Terry George, The Shore won Best Director and Best Actor at the Rhode Island Film Festival, and is nominated for an Irish Film and Television Award.

A neurotic inventor creates a time machine, only to get caught up travelling around yesterday.

Everybody is going to die one day. Oskar, 70, is going to die in 6 days. He is now ready to forgive his brother for a disagreement years ago. Will he reach his brother, who he believes live on the other side of the Atlantic Ocean, before it’s too late?