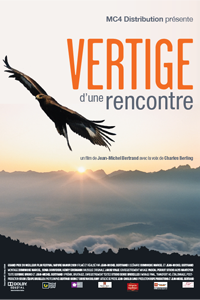 There have been many breathtaking wildlife films, but few attain the sheer virtuosity and poetic force of Jean-Michel Bertrand's Flirting with Heights. This was a remarkable and highly personal project shot alone over the course of four years in the French Alps, initially with the aid of Bourrique (a donkey) and then Mistral (a Pyrenean pony). Bertrand took his equipment to the highest peaks, in all seasons, and waited patiently, for hours, for days, for months, for years. His painstaking discretion allows his camera to capture astonishing images of virtually every living creature in what we come to see as a wonderland: from kestrels and vultures to stoats and mountain goats, from the athleticism of the chamois to the grace of the elusive European golden eagle. The crowning sequence arrives with the first ever shots of the eagles in their eyrie with two offspring which Bertrand observes from early days to first flight. His motto is "observation without interference," his gift to detect and reveal: "It is enough to push open the door, the magic is there, everywhere."

And his ally in this creative work is light, "this light which cloaks the world in magic." Bertrand's camerawork is exceptional, his patience monumental--three years alone to capture the images of the eyrie. Shots of trees in spring and autumn, of patterns in snow and of snowfall, of peaks at sunrise and sunset, in clear light and in mist, are the equal of the work of the most gifted artist. And throughout there runs, like the pure mountain streams we see, the perfectly synchronized score of Jacob Vinje. In answer to Cousteau's work under water, comes Bertrand's film from the mountains. As he exclaims at one magical moment: "Here at last are the longed for images."