With Jason McHugh in person! 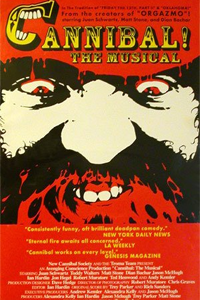 Actor/producer Jason McHugh will appear in person with his new book, SHPADOINKEL: THE MAKING OF CANNIBAL: THE MUSICAL. Double feature with The Legend of Alfred Packer.

Originally titled ALFERD PACKER: THE MUSICAL!, Trey Parker’s film debut, shot in Colorado while he was still a film student at CU Boulder, was later picked up by Troma and retitled CANNIBAL: THE MUSICAL. Actor and producer Jason McHugh played an instrumental role in getting CANNIBAL: THE MUSICAL onto MTV, where it was noticed by a hotshot studio executive who later helped launch SOUTH PARK. Jason also pioneered the idea of the “barnacle-fest” when he crashed Sundance with CANNIBAL: THE MUSICAL, thus planting the seed that gave way to Slamdance the next year. Since that time, CANNIBAL: THE MUSICAL has taken on a life of its own as a live show that is performed across the nation, including recent sold-out performances in Denver. We bring back Jason McHugh for a reprise of the film and a Q&A, with plenty of added surprises.

Before there was South Park, Baseketball, or Orgazmo, there was this Rocky Mountain freakout from the fevered imaginations of Parker and Stone, a rousingly lowbrow retelling of the legend of Colorado cannibal Alferd Packer and his bizarre culinary gifts.

Shot in and around the duo's Denver home base (in 1996), Cannibal! is rife with the same kind of elbow-in-the-groin humor that has made Cartman and his wee pals household names, with Parker not only directing and writing, but also acting the role of the little carnivore nobody loved.

Beginning with a grizzled Packer safely tucked away in his Denver jail cell, the film relates the tragic tale from Packer's point of view. As he sees it, the whole unfortunate series of events stemmed from the theft of his beloved horse LeAnne by a trio of larcenous trappers. Packer has been nominated by default to lead a group of miners from Utah to Colorado in search of gold. After the loss of LeAnne, Packer mistakenly leads the group into the Rockies' frozen wastes and, one by one, they succumb to the inclement weather patterns (as well as each other). Along the way, they meet up with a bizarrely Asian group of kung-fu Ute Indians, a giant Cyclops with a seriously nasty ocular-drainage impairment, and the aforementioned trappers.

As if the sheer outrageousness of Parker's tale weren't enough for you, the film is peppered with a genuinely warped series of musical numbers that make Rodgers and Hammerstein sound like, ah, Stephen Sondheim. Showstoppers like "A Shpadoinkle Day," "Hang the Bastard!," and "Let's Build a Snowman" crop up when you least expect it, bringing the incessant stream of body parts and their corresponding fluids to a sudden, thankful halt. And surprising as it may seem, the songs aren't half-bad. Why the film has more or less been shelved until Parker gained fame elsewhere is anyone's guess, but Cannibal! is a gooey, hilarious winner nonetheless.

Budgetary constraints aside, the film flows evenly from beginning to end, with Paker's bookended, jailhouse explanation serving as the framing device. Both Parker, and to a lesser degree Stone, are excellent, with Parker playing Packer as a befuddled, horse-lovin' naïf and Stone mastering the art of annoyance well before South Park hit the scene. It's a ridiculous, over-the-top carnival of gore, sophomorically sly humor, and cheese-whiz choreography that manages -- above all odds -- to be cheerily invigorating as well.

Here's hoping for an Ed Gein-inspired sequel to show up soon.