A selection of the best shorts from Sundance 2012 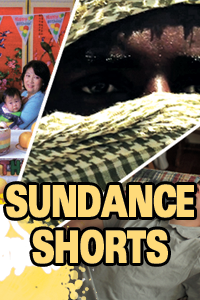 In an attempt to keep up with social pressure in a technologically advanced world, Chance starts a texting relationship with Genevieve, a girl he meets at a yogurt shop.

A short film about teaching creativity by This Is It Collective.

A gay Korean-American man yearns for a family life just out of reach.

A story of pirates in Somalia, told from the perspective of the pirates themselves.

Katrin decides to face her old boyfriend, who is back to collect some of his stuff.

A man comes back from a Serb prison to his wife and son. Much has changed since he was declared missing and continuing where they left off four years ago may not be as easy as it seems.

The trials and tribulations of young robots surviving at the sharp end of inner city life, living the predictable existence of a populous hemmed in by poverty, disillusionment and mass unemployment.

Song Of The Spindle

An animated, humorous and informative conversation between a sperm whale and a man. Each one tries to convince the other that his brain is bigger.