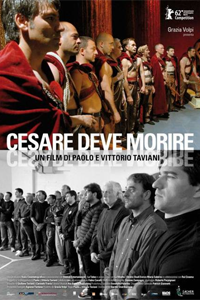 Part of the Spring Into Shakespeare lineup.

The Tavianis’ presence at the 62nd Berlin International Film Festival’s Competition Section was initially hailed as inevitable, an homage to their glory days that were long past. True enough, injecting their Italian neorealist roots with a dose of magical realism, the brothers had dominated the 70s and 80s, winning a Palm d’Or for “Padre Padrone” in 1977 and countless festival slots and awards for “Allonsanfàn”, “Kaos” and “The Night of the Shooting Stars”.

Sixteen years after “Elective Affinities”, their last film reminiscent of their earlier work, the Taviani brothers are back in top form, despite their octogenarian status. Contrary to predictions, Paolo, 81 and Vittorio, 83, are back in the competition section and not because of their glorious past but thanks to their brilliant present.

According to the two brothers, “Caesar Must Die” started out accidentally when they visited the Rebibbia prison in a Roman suburb and with the inmates who had taken part in a poetry event focusing on Dante’s “Inferno”.

“We found out that most of them came from maximum security facilities and were mostly imprisoned for life due to their connections to the Camorra and the Mafia. Their instinctive performances were marked by this absolute urgency to tell the truth. When we left the prison, we realized we had to know more about them and why they had landed in jail. We went back and asked if they wanted to participate in an adaptation of Shakespeare’s “Julius Caesar”. Their reaction was immediate. “Let’s get started at once.”

What you see during the film’s 76 minutes are the auditions, the casting and the preparation, as the Shakespearean play slowly infiltrates prison cells along with the protagonists’ psyche. It’s about art - not as a means of reformation, but as the safest path to personal freedom.

The Tavianis remain invisible throughout, taking advantage of the enclosed rehearsals to construct an imaginary stage that’s bursting with real life. Making a case study of each face, none of the inmates have to confess their crimes because you can read them like an open book. Everything they think, everything they’re forced to live with is right there on their face.

As for “Julius Caesar”, it’s a work so authentically contemporary that you’d swear it was specially written to describe the power play and the betrayal in the heart of this unorthodox theatrical troop.

Using classic scenes from Shakespeare’s play (and some minimal everyday dialogue in-between), the Tavianis turn the mythical tale of the rise and the fall of the Roman Empire into an essay about the importance of art and personal expression, an everyday tragedy that goes from hubris to catharsis without ever losing its humanity.

It’s only after the show is over and the inmates have to go back to their cells that this place finally feels like jail. And you can’t help but get goose pimples down your spine when they finally realize what they’re missing.