A Nightmare on Face Time 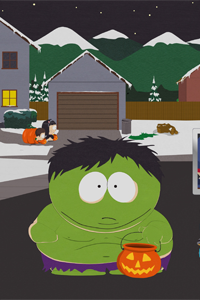 All you need to know about tonight is this: A NIGHTMARE ON FACE TIME is one of the funniest SOUTH PARK episodes you'll ever see. It references THE SHINING. It has incredible prescient things to say about how we watch movies and how social networking is changing the way we think and engage with the world. And, best of all, tonight's screening of A NIGHTMARE ON FACE TIME will be introduced by SOUTH PARK animation director Eric Stough, who will then follow-up afterwards with both a Q&A and behind-the-scenes presentation that will show you how that specific SOUTH PARK episode was made.

For those who need a plot, we cribbed this from Wikipedia:

Randy announces to his family that he has purchased a Blockbuster video store for $10,000, a venture he believes will make them rich. His family is skeptical of this idea, since online video streaming has made brick and mortar rental stores obsolete. This is illustrated by the eerie, abandoned-looking store, which houses ghosts, and which the citizens of South Park regard as a haunted house of sorts. Despite this, Randy insists that his family all work at the store. When this precludes Stan from trick-or-treating with his friends, Kyle resorts to using FaceTime on his and Stan's iPads in order for Stan to participate in the activity via telepresence. When the boys, dressed as the Avengers, see a convenience store being robbed, they charge into the store, playing the roles of superheroes. But when they see that it is being robbed by a group of thugs called the Redbox Killers, and that the Killers have murdered the store clerk, the boys flee. In so doing, they lose Kyle's iPad and a flyer for a Halloween party called the Monster Mash. The Redbox Killers find the iPad and flyer, torture Stan virtually, and realize that the boys are going to the Monster Mash. The Killers dump the iPad in a field before heading to the Monster Mash to silence the boys as witnesses.

A Nightmare on Face Time