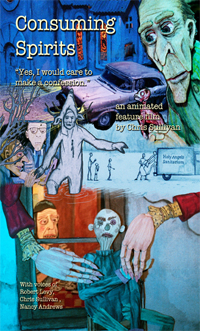 “Consuming Spirits,” an animated feature by Chris Sullivan, is a defiant — or maybe, even better, an oblivious — exception to the rules and patterns of contemporary cartoon entertainment. At a time when animation is expected to be computer-generated, three-dimensional and relentlessly upbeat, Mr. Sullivan’s film is flat, handmade and melancholy, a dark and painful fantasy for grown-ups.

I would be inclined to welcome it as an eccentric protest against digital tyranny, but “Consuming Spirits” is so much more than that. The product of 15 years of labor — undertaken by Mr. Sullivan in collaboration with his friends and members of his family, using paper, ink and a 16-millimeter camera — it is a work of obsessive artisanal discipline and unfettered artistic vision. You have never seen anything like it.

At least not in a movie theater, and not recently. This achingly sad, occasionally grotesque story of family secrets, sexual longings and small-town malaise, told through drawings, paper cutouts and miniature models, has more in common with intimate graphic novels like David Small’s “Stitches” or Alison Bechdel’s “Fun Home” than with any live-action indie melodrama I can think of. The wintry, northern, class-divided setting might resonate with readers of Joyce Carol Oates. But the blend of narrative quasi-realism and wild, somber visual invention in “Consuming Spirits” is entirely original.

In the first of five chapters, you are introduced to the three principal characters, whose vividly ugly faces, gangly bodies and dry, weary voices are likely to haunt you long after the movie is over. Earl Gray (voiced by Robert Levy) is an elderly late-night radio host, who dispenses highly detailed, vaguely metaphorical gardening advice to insomniacs. Gentian Violet (Nancy Andrews) lives with her aged mother and lays out pages at a newspaper. She pursues a desultory workplace romance with Victor Blue, a broken-down fellow continually in trouble with his boss for his surreally inappropriate picture and caption choices.

At least in that regard, Victor, who speaks in Mr. Sullivan’s voice, is something of an alter ego for the filmmaker, a skilled illustrator and cultural omnivore who decorates his imaginary provincial landscape with odd little jokes and allusions. One that caught my eye was an advertisement for Falconetti’s Barbecue, a grisly bit of cinephile humor referring to Maria Falconetti, who played Joan of Arc in Carl Dreyer’s 1928 silent film. But nearly every frame in “Consuming Spirits” — and there are more than 230,000 of them — seems to contain a similar morsel of oblique or buried wit.

This density of detail contributes to the film’s unsettling emotional intensity. The fates of Gentian, Earl and Victor converge in a car accident that gravely injures a nun and that seems at first to fall into the “random, senseless” category. But nothing in Mr. Sullivan’s universe is random, and subsequent chapters reveal a tangle of dark meanings under the surface.

These are best left for the viewer to discover, since part of the pleasure of “Consuming Spirits” lies in marveling at the intricacies of its design. We travel from the colorful, cluttered daily reality of the characters into realms of memory and fantasy, most of them rendered in spare and beautiful black-and-white line drawings. The past encroaches on the present, and the consequences of half-forgotten transgressions play out in surprising but nonetheless curiously logical ways.

Mysteries proliferate. Whose bones are those in the woods, shrouded in the skin of a deer? Who is locked up in the convent that conveniently and ghoulishly doubles as an insane asylum? And how do actions arising from family love or neighborly charity cause so much damage and grief?

That last question is the key to this remarkable film, which conducts its inquiry into the darkest zones of the human heart in a spirit at once anguished and playful. Mr. Sullivan’s pictorial wit and storytelling brio are delightful in ways that cut against the harshness of the story without blunting its deep ache.

As its title suggests, “Consuming Spirits” is both about the power of (figurative) ghosts and the literal effects of drunkenness. It weaves a complicated, intoxicating spell and sets the mind running in several directions at once, not all of them toward happy places. The fact that these realms are represented in exaggerated, often comical pictures does not make them less disturbing, but it does create a sense of enchantment that turns bad feelings inside out. This movie is sometimes a downer, but it’s also a wonder.