The Secret of Kells

Part of Animation Appreciation Week! Kids get in free 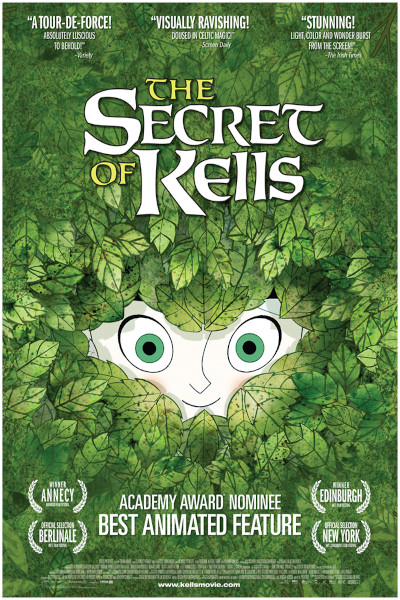 In the remote Irish woods, Cellach (Brendan Gleeson) prepares a fortress for an impending attack by a Viking war party. Unbeknown to Cellach, his young nephew Brendan (Evan McGuire) — who has no taste for battle — works secretly as an apprentice in the scriptorium of the local monastery, learning the ancient art of calligraphy. As the Vikings approach, revered illuminator Aidan (Mick Lally) arrives at the monastery and recruits Brendan to complete a series of dangerous, magical tasks.

A bewitching animated fairytale for children and adults alike. This vibrant animation is a spirited retelling of the provenance of Ireland's most cherished artefact, the Book of Kells. With the Viking hordes approaching, the monks of Kells are forced to turn their attention from transcribing manuscripts to building barricades. The future of the precious book is in jeopardy and it falls to Brendan, young nephew of the abbot Cellach, to save the day. The Secret of Kells was Cartoon Saloon's first feature film and was directed by Tomm Moore with Nora Twomey as Co-director. Nominated for an Academy Award in 2010 for best animated feature, the Secret of Kells has screened and won awards in major festivals worldwide.

Based on the origins of Ireland's most famous illustrated manuscript, the Book of Kells, the film was created by award-winning Irish studio, Cartoon Saloon.

The film has won acclaim across the world including the 2009 Audience Award at the Edinburgh International Film Festival, the first animated film ever to do so, and the Screen Directors Guild of Ireland, Directors Series Award 2008 in association with the Directors Guild of America.

It also garnered the Audience award at the 2009 Annecy film festival, part of the 33rd Annecy Animation festival, and was named best Irish film at the 2009 Jameson Dublin International Film Festival.

The Secret of Kells