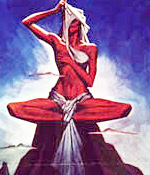 Follow Jodorowsky's Christ-like figure along for a symbolic journey that explores the most spiritual aspects of human nature. Packed with haunting imagery and graphic characters, prepare for a ride of unrestrained religious surrealism. (N. Reed, Movie Habit)