Suspenseful Tale of Iranian Siblings Who Lose A Pair of Shoes 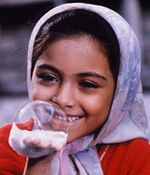 Haunting in its charm, "Children of Heaven" opens a window on both contemporary Tehran and the hopeful heart of childhood.

This lovely, amusing film deserves a big audience -- especially families. It touches on the innocence of children with tremendous affection.

Though in Farsi, "Children of Heaven's" English subtitles should pose no problems for young audiences. The movie, which opens today at Opera Plaza Cinema, is so telling in matter-of-fact visuals that subtitles are hardly needed.

Ali is the son of impoverished parents, and the family lives in Tehran's poor southern section. The loss of something so basic as a pair of shoes could be a bitter financial setback for them, and both Ali and his patient, adoring sister, Zahra (Bahareh Seddiqi), know it.

The sister is willing to believe that her brother might somehow recover the shoes, so she reluctantly goes along with his plan to hide the predicament from their parents. Ali and Zahra agree to share Ali's beat- up sneakers. Though a size too big, Zahra wears them to school in the morning, then trades them back to Ali at a prearranged meeting place so the brother can wear them to school in the afternoon. The plan works OK, but there are hitches.

The story is presented in a great wash of the everyday. Director Majidi heightens innocence and vulnerability as he trains the camera on the kids, barely noticed in fascinating, sprawling, contemporary Tehran. As innocents, they are shining examples of humanity in an impersonal world.

The film also depicts their tight- knit family. The father (Amir Naji) seeks work as a handyman, but his life really centers on the local mosque. The film makes no judgments about religion -- it's just part of life in a Muslim city. The mother (Fereshteh Sarabandi) is nursing a baby, but she's disabled by a serious back condition.

Western viewers rarely get to see everyday life in Iran and, filmed in documentary style, "Children of Heaven" provides an entrancing look while also presenting a heartrending story of tenderness and childlike determination. In scenes reminiscent of Vittorio De Sica's "The Bicycle Thief," Ali accompanies his father to look for work in Tehran's cloistered, wealthy suburb. The family's luck improves slightly.

But the film's loveliest touch is Ali's attempt to win for his sister a new pair of shoes, third prize in a grueling running race. Ali seems to be the fastest runner in Tehran, but he must make sure that he comes in only third. It's a lot harder than he imagined -- and a real test of love.