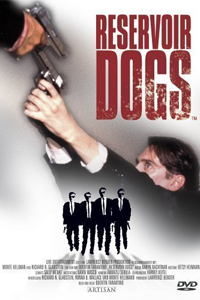 Michael Medved probably won't agree, but some of the most enthralling movies of our time have come down to the spectacle of raging macho blowhards hurling profanities and hell-raising wisecracks at each other. That's true of Martin Scorsese's Mean Streets and Raging Bull, films that forge a gutter poetry out of the word ''f---.'' It's true of Glengarry Glen Ross, in which David Mamet's real estate salesmen set up a dense crossfire of bullying and triumphant obscenity (Alec Baldwin to disgruntled employee: ''F--- you -- that's my name!''). What makes these characters seem so tantalizingly alive and true? Perhaps it's simply this: In a civilized world, where people have to watch their tongues on the job, in the classroom, even, perhaps, when speaking to their loved ones, there's something primal and liberating about characters who can let it all hang out, whose ids come bursting forth in white-hot chunks of verbal shrapnel.

Part of the exhilaration of Reservoir Dogs is that it's a dizzying entry in the ''f--- you!'' school of macho bravura. In the opening scene, a half-dozen cocky toughs, most of them in their late 20s and early 30s, sit around a coffee shop debating the meaning of Madonna's ''Like a Virgin.'' Much of what they say is ridiculous (some of it is also pretty sharp), but the speed and knowingness of their streetwise repartee is like a tonic; it also lets us know they aren't dummies. This isn't just dialogue -- it's the music of mano a mano exhibitionism. As it turns out, these guys barely even know each other. They're anonymous professional crooks who have been assembled to rip off a jewelry wholesaler.

Brilliantly acted by a high-testosterone cast that includes Harvey Keitel, Steve Buscemi, Chris Penn, and the charismatic British actor Tim Roth, Reservoir Dogs is funny, thrilling, and so unabashedly violent it both shocks you and leaves you giddy at your own capacity for shock. At the same time, this is an ingeniously plotted 1950s-style heist picture: It's like John Huston's The Asphalt Jungle or Stanley Kubrick's The Killing remade by the Scorsese of Mean Streets. Quentin Tarantino, the young newcomer who wrote and directed the film, is hooked on the pleasures of cinematic game playing. Inspired by the elaborate, crossword-puzzle narrative in The Killing, he leaps back and forth in time, cutting between the robbery's aftermath, in which the thieves gather in a dank, cement-walled warehouse to plot their next move, and a series of flashbacks that include the planning of the crime and interviews between the thieves and their prospective boss (played by that great growler Lawrence Tierney).

Gradually we learn that the robbery didn't come off as planned, and that one of the thieves is, in fact, an undercover cop. We see the post-heist rendezvous degenerate into eruptions of anxiety and gun-totin' rage. We see the thief who's a cop (once again, in flashback) training to go undercover by polishing up a ''personal'' underworld anecdote; by the time he's finished, you'll never let another TV show fool you into thinking police work is easy. And, in a scene that serves as the film's gonzo centerpiece, we see one of the thieves, a blithely good-looking psychopath (Michael Madsen), torture a cop (Kirk Baltz) he has captured for no good reason except that he likes to torture people. This outrageous sequence, scored to the '70s-pop accompaniment of Gerry Rafferty singing ''Stuck in the Middle With You,'' will have you squirming in your chair and giggling at the same time.

Throughout the picture, the characters are referred to by fake names: Mr. Brown, Mr. Orange, Mr. White, and so forth. That way, they won't know anything about each other and can regard their fellow crooks as trustworthy partners. After a while, though, shades of their real identities begin to bleed through. By the end, one of them has a compulsive desire to come clean; it turns out he would have been better off clamming up. Like Huston and Kubrick, who used their intricate (but botched) heist plots to demonstrate the existential absurdity of a perfect crime, Tarantino, in Reservoir Dogs, has made a nihilist comedy about how human nature will always undercut the best-laid plans. In the end, these wily thieves may want to trust one another, but trust is the one thing they can't have. It's what their delirious macho showmanship -- all bluster, all noise -- shuts out.