With Pam Grier in person! 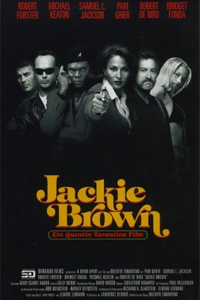 Facing the daunting task of making a third feature that could measure up to "Reservoir Dogs" and "Pulp Fiction," not to mention one that would disarm the detractors ready to pounce on him no matter what, Quentin Tarantino treads turf that is both familiar and fresh in "Jackie Brown." Unquestionably too long, and lacking the snap and audaciousness of the pictures that made him the talk of the town, this narratively faithful but conceptually imaginative adaptation of Elmore Leonard's novel "Rum Punch" nonetheless offers an abundance of pleasures, especially in the realm of characterization and atmosphere. Down-and-dirty pic looks to find its most ardent fans among cinephiles and black viewers, with mainstream critics and audiences more likely to harp on its obvious indulgences. B.O. prospects are OK in urban areas, less so elsewhere.

Enshrined as Hollywood's golden bad boy after "Pulp Fiction," Tarantino was clearly in a position to do anything he wanted as his next film and took more than three years to do it. Superficially sticking to his roots in violent crime stories and paying homage to '70s blaxploitation pics through his offbeat casting of Pam Grier in the title role, writer-director also uses the occasion to promisingly expand his range in more emotional and nuanced directions. This development may be lost on genre fans expecting heavy mayhem and gunplay, of which there is some, but it augurs well for Tarantino one day venturing into other types of stories.

As it is, "Jackie Brown" is an arguably too fulsome examination of deceit, treachery, cunning, stupidity, mistrust, risk and daring among a group of small-timers. Transferring the action from Leonard's Miami to his own South Bay area of L.A. and changing the leading character from white to black, Tarantino has adhered closely to the plot of the celebrated author's 1995 bestseller but has given it a distinctive tang through his patented touch with contempo street dialogue and highly personal use of source music and pop culture artifacts.

Film takes its own sweet time setting its gears in motion, with the emphasis on sweet when it comes to amusingly establishing its characters, but to the detriment of pace. Ordell Robbie (Samuel L. Jackson) is a very smooth and lethal arms dealer operating out of a Hermosa Beach pad he shares with blond and always stoned surfer girl Melanie (Bridget Fonda). Hanging out with his longtime partner, Louis Gara (Robert De Niro), who has just been released from the slammer after serving four years for bank robbery, Ordell critiques the various assault weapons he can deliver while announcing that he intends to get out of the illicit gun business after stashing away another 500 grand down in Mexico.

However, Ordell, whose nearly every phrase contains the n-word, must first deal with an errant associate, Beaumont (Chris Tucker), a fast-talking hustler who has violated his parole. In a sequence that typifies Tarantino's taste for combining outrageous comedy with startling violence, Ordell sweet-talks his manic friend into climbing into his car trunk in order to surprise an adversary, then, in a boldly pro-tracted long shot, casually shoots him when they arrive at a vacant lot.

More trouble lands on Ordell's doorstep when stewardess Jackie Brown (Grier) is busted at LAX by ATF agent Ray Nicolette (Michael Keaton) and cop Mark Dargus (Michael Bowen) while smuggling $50,000 into the country for him. Facing a prison term and meager future prospects upon her release, the sharp-looking lady in her mid-40s knows she'll get off easy if she helps the authorities nail Ordell, who bails Jackie out but is thwarted in his attempt to do to her what he did to Beaumont.

In a story featuring several relationships in which trust and mutual suspicion perform a continual balancing act, the most significant is the one carrying the least narrative weight. Bail bondsman Max Cherry (Robert Forster), a resolutely solid, middle-class and middle-aged man whom Ordell uses to spring his friends, picks Jackie up at jail and offers her a ride home. His function in the plot would end there except that, in a moment con-veyed with great wit through the music, he falls hard for Jackie the moment he sees her, takes her for a relaxing drink and eventually sets this woman with few options on a path that will see her bravely playing the authorities and Ordell against each other.

The quasi-romance between these two unlikely partners, both of whom are at midlife cross-roads, provides a quiet emotional undercurrent beneath the yarn's otherwise more extreme erup-tions. Laying low for awhile, Louis takes the flaky Melanie up on her invitation to have sex, then berates Ordell for trusting her. Admitting to Ordell how she's had to cooperate with the cops, Jackie convinces him that she's going to put one over on them by staging an intricate money exchange in which she'll actually return to Ordell nearly all of his $500,000.

In a mild, but nonetheless highly effective, echo of his "Pulp Fiction" structural experimentation, Tarantino, in a 20-minute setpiece, stages this ex-change three times from different points of view, each one revealing key aspects of the daredevil maneuver. As the main participants urgently pursue their interests in the bloody aftermath, half of the major characters bite the dust, leading to a mutedly upbeat finale.

The action indisputably flags during the long midsection, but the film's longueurs are inseparable from its strengths in that they stem from the same fact: Tarantino works his scenes for all they are worth, extracting from them the maximum values of drama, humor, color and character. For him, there are no small or insignificant sequences, nothing to be thrown away.

The results of this approach are scenes that, individually, play wonderfully well but, when laid end to end, tend to flatten out. Pic suffers, not only from overlength, but from a lack of dramatic peaks and valleys, of punctuation, something that was alleviated in the equally long "Pulp Fiction" by the audacious dovetailing structure and more outrageous incidents.

Ultimately, despite the flavorsome aspects of all the elements, it can be argued that a genre piece of this kind has trouble supporting such extended treatment, even when the characters and situations are deepened as far as Tarantino takes them. In this light, the director's courage in scouting the outer reaches of this sort of material can be regarded very sympathetically, even if the approach ultimately reveals the form's limitations.

Tarantino's knack for imaginative casting and extracting unusual, unexpected notes from actors is in full flower here. A true icon of the '70s, Grier, who has aged beautifully, may not have the widest range, but her tremendous poise, visible at once in the opening shots of her arriving at LAX, serves her exceedingly well, and she does have two or three big moments to sink her teeth into.

Jackson, sporting a flowing hairdo and stringed chin hair, is superb as the charming, loquacious, ultimately malevolent gunrunner who uses people as pawns for his own ends. Forster, another thesp Tarantino has resurrected, lends a wonderfully lived-in quality to the bail bondsman who's seen it all and has a special appreciation for what Jackie is going through.

Fonda brings an irreverent spunkiness to her amoral beach girl, and Keaton manages to inject some honest emotion into his efficient federal agent. De Niro plays a seedy, relatively uninteresting sideline character for most of the way, only to erupt in the late going in ways that are both insanely violent and touchingly honest and loyal.

Enormously entertaining soundtrack is loaded with soul and funk hits, some from vintage blaxploitation hits. Technically, film is evocative of mostly dingy locales where the characters live and operate, and pointedly avoids a slick look.