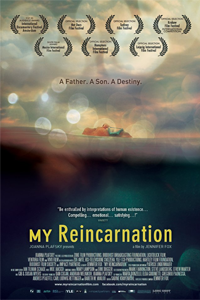 When the Chinese occupied Tibet in 1959, Namkhai Norbu Rinpoche had the sense to get out of the country while the going was good. The exiled monk moved to Italy where he married a local gal and had a couple of kids, including a son, Yeshi, who was recognized from birth as the reincarnation of a renowned Buddhist master.

And while Rinpoche was building a formidable following as a spiritual leader in the West, he simultaneously tried to groom the boy to follow in his footsteps. However, Yeshi saw himself more as a modern Italian than a traditional Tibetan, Thus, during the kid's formative years, he felt little connection to either the faraway homeland he'd never known or to the late guru whose spirit had supposedly taken over his body.

That didn't stop Rinpoche from pressuring Yeshi to embrace his destiny and thereby keep the family legacy alive. The often animated give-and-take between the two is the primary focus of My Reincarnation, a riveting biopic directed by Jennifer Fox. The award-winning filmmaker has a penchant for addressing her subject-matter in unusual depth, as was the case with her previous offering, Flying, an autobiographical documentary six hours in length.

What makes this picture fascinating is the fact that she shot it over the course of 20 years, which enables the audience to witness a tremendous degree of personal development on the part of the protagonists, especially Yeshi who goes from being a rebellious teen to an aspiring musician/photographer to a settled, suburban family man in front of our very eyes. Watching that evolution, who would ever guess that he might eventually come around to giving his dad's desire serious consideration?

An intriguing, "Marjoe"-esque adventure, if you remember that Oscar-winning expose' revolving around a penitent, Pentecostal child preacher who eventually 'fessed up about being a charlatan. This variation on the theme is designed to generate similar debate about Eastern philosophy, by highlighting how a corporate position at IBM might have belatedly led a reluctant, designated-demigod down a path of enlightenment lined by throngs of gullible devotees-in-waiting.