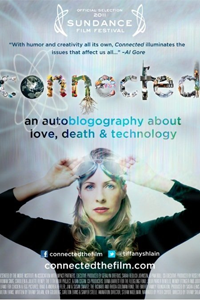 A documentary snapshot of the blurry, ever-evolving intersection of the relationship between technology and human bonds and grander societal development, "Connected" is wonderfully emblematic of the ways that intelligent artists can use the medium of film to explore issues and ask questions in a manner that encourages and bolsters a pleasantly unsettled life of exploration and outreach in the minds and hearts of viewers. Self-touted as "an autobiography about love, death and technology," Tiffany Shlain's film is a deeply felt personal travelogue in the vein of Tom Shadyac's similarly questioning "I Am," in which the director set out (broadly speaking) to make sense of his feelings of emptiness in a material world. Part treatise, part psalm, part uncertain investigation, it elucidates and illuminates, imparting facts but never once a sense of holier-than-thou snootiness. Plain and simple, "Connected" connects, on multiple levels.

The founder of the Webby Awards, Shlain initially embarked upon the film as a more direct exploration of the effects of technology on our daily lives. Just as production was underway, however, she discovered both that she was pregnant with her second child, and that her father and would-be collaborator, surgeon and author Leonard Shlain, was diagnosed with brain cancer, and given only nine months to live. Undeterred, Shlain soldiered on, and incorporated elements of these unfolding events into her narrative, which, among other things, posits that both the advent of the alphabet during humankind's development and increased literacy over-stimulated the left (more methodical, and traditionally male-associated) hemisphere of the human brain, and that the Internet has a tremendous capacity to synthesize the two hemispheres.

"Connected" benefits tremendously from Stefan Nadelman's animation, which gives the film a spry liveliness, as well as the fact that Shlain (along with her credited co-writers) obviously took tremendous care in crafting the movie's narration, which gives some credit to Peter Coyote but mostly leans on Shlain herself. In stitching together archival images from all sorts of eras and cultures with open-hearted monologues of a more personally-inflected nature, "Connected" deftly illustrates macro concepts in living, breathing and specifically private ways, and therefore the dependent nature of humankind -- on both one another, and the world we inhabit.

Sometimes it alights upon a topic without quite enough set-up (the plight of the honeybees, for instance, already the subject of two other documentaries this year), and other times it misses chances to seemingly better highlight and underscore the often damaging manner in which societal and political problems are dealth with in isolation of one another. The film's overriding aesthetic is one of hopefulness, though, and while so many other movies or books or speakers portend doom as it relates to technological advance and connection, Shlain's film makes a fairly convincing case for the net positive effect of a world's activated central nervous system. It sounds ridiculously simplistic to say, or perhaps faint praise, but at its core "Connected" is a very human film. It has a soul, and bristles with a hunger and intellectual vigor lacking in all but a small percentage of modern American films. "When you tug at a single thing in the universe," naturalist and author John Muir once observed, "you find it's attached to everything else." Shlain's persuasive and engaging film makes it easy to agree with that sentiment.