Syndromes and a Century

Part of the Brakhage Center Symposium 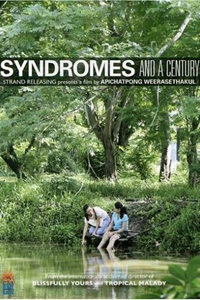 Among the recent, eloquent outpourings of appreciation for Michelangelo Antonioni, a few writers stopped to wonder whether Antonioni would matter as much in today's climate. Probably not. If he did, we'd also all be talking about the films of the 37-year-old Thai director Apichatpong Weerasethakul, which are as richly atmospheric and as vaguely worried as the Italian's, a touch more pleasurable, too.

The truth is, like Antonioni before him, Weerasethakul is making non-narrative movies for serious movie lovers, and the marketplace in this country is increasingly indifferent to people who take movies seriously. Mind you, "serious" shouldn't be confused with "self-serious" - Weerasethakul makes serious movies without the burden of solemnity. He's one of the most excitingly unburdened directors in the world.

His fifth feature, "Syndromes and a Century," might be his most purely intoxicating (2002's "Blissfully Yours" and 2004's "Tropical Malady," both in dire need of greater viewer appreciation, received tiny US releases). This is as you should expect from a movie featuring a monk who once aspired to be a DJ with a comic-book store, and with an aerobic finale so effervescent it should come carbonated in a pull-tab can.

The contents of that cinematic soda would not contain Red Bull, though. Weerasethakul is a man of sly humor and great patience. There is play at the heart of his movies, yet they're contemplative to the point of being spiritual. When the camera moves, it does so with a deliberateness that haunts. While two characters gossip and chitchat during an early scene, the camera loses interest in following them and stares off, almost longingly (and for some length), at a field, a small house, and the string of trees beyond. We can hear the co-workers talking and in motion, but they've been rendered inconsequential. Nature is the visual imperative.

"Syndromes and a Century" was commissioned as part of Vienna's New Crowned Hope Festival, which celebrated Mozart's 250th birthday by soliciting works that honor his themes and artistic virtues. Starting today, each commissioned film is having a short run at the Museum of Fine Arts.

In part, Weerasethakul's contribution is a story of unrequited affection between a country doctor (Nantarat Sawaddikul) and her irrationally lovesick suitor, Toa (Nu Nimsomboon). Between patients, she asks him to lunch, and he demurs (he's not hungry), but he has no problem proposing marriage during the same conversation. He says he adores her. She says she can't relate, eventually telling this sap the story of a prior relationship with a man who sells glow-in-the-dark orchids, which the film shows us.

Syndromes and a Century

Sponsored by The Brakhage Center Symposium