Muenzinger AuditoriumDr. Strangelove or: How I Learned to Stop Worrying and Love the Bomb
Mar 1

Three Crowns of the Sailor

Friends Naki on the Monster Island

My Night at Maud's

Chloe in the Afternoon

Muenzinger AuditoriumChloe in the Afternoon
Apr 9

The Trial of Joan of Arc

Muenzinger AuditoriumThe Curse of the Dragon Sword
May 5 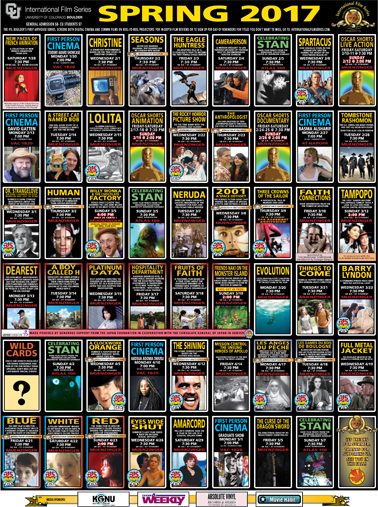 In the almost 20 years that I’ve been programming the IFS, I’ve always tried to provide a balance of independent, foreign, and repertory titles in relatively equal measure. I’ve also tried to be receptive to both the demons and angels that whisper in my ear.

This semester the mix favors the past and it does so with a surprising number of screenings on 35mm film. I’d like to think this a subconscious corrective and calling to learn from our past. Mostly, however, I’d like to acknowledge the voices from my colleagues in the Film Studies program, as well as the kind people at the Consulate General of Japan in Denver.

A recent article by Malcolm Gladwell in The New Yorker (“The Outside Man”) contrasts the contributions of Daniel Ellsberg with those of Edward Snowden. Toward the end of the piece, Ellsberg is described as “weeping for what the United States has turned into.” It also has Ellsberg asking Snowden if he’s ever seen Dr. Strangelove to which Snowden replies “No,” and adds,“Before my time, man.” I’m sure this didn’t help Ellsberg’s funk.

Here’s to hoping that any young person reading this will learn from Snowden’s cultural illiteracy by availing themselves the opportunity to see Kubrick on film, and going a step beyond that by watching what Kies’lowski, Bresson, and many other great filmmakers have to offer us this Spring at the IFS