Last Life in the Universe

Muenzinger AuditoriumHunt for the Wilderpeople
Sep 23

Lo and Behold: Reveries of the Connected World

Muenzinger AuditoriumLo and Behold: Reveries of the Connected World
Oct 17

Muenzinger AuditoriumThe Man Who Knew Too Much
Oct 27

The Company of Wolves

Muenzinger AuditoriumThe Cook, the Thief, His Wife & Her Lover
Nov 14 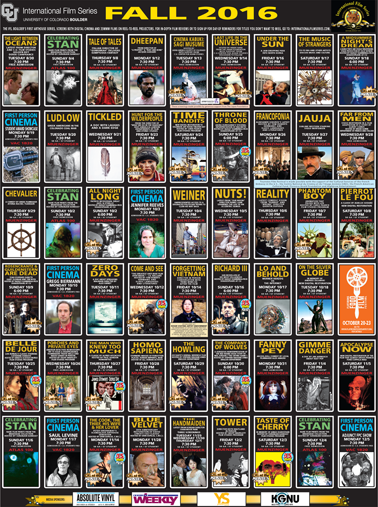 The IFS turned 75 this year! It was a treat to spend the summer perusing the archives to see the changes the program has gone through over all these years. Change is inevitable, and anyone holding this calendar will notice a big change in layout strategy. We’ve abandoned the week-by-week grid in favor of a calendar that now goes show-by-show. This allows us to include the First Person Cinema and Celebrating Stan events with the regular IFS programming in one layout. This semester’s calendar also begins a bit earlier (with a Sneak Preview of Derek Cianfrance’s latest film, The Light Between Oceans, on August 30th), and ends later (with offerings into December).

In addition, we’ve partnered with several other departments and programs here on campus for C.U. at the Movies. These are movies that various faculty members across campus have either selected or supported, with each giving special introductions before the show.

I’d also like to thank the Japan Foundation and  The Tourneés Festival for their program inclusions.

On the topic of inevitable change, please look closely at the latest IFS parking map to best plan out your evening of movie-watching. Euclid Autopark will be unavailable in the fall due to construction, but there are still free parking options that are a small walk away, or pay options that land you even closer.

CU At the Movies

C.U. at the Movies is made possible in part by funding from the CU Boulder College of Arts and Sciences and support from the following departments:

Screenings of these films made possible by generous support from The Japan Foundation and the Center for Asian Studies at CU Boulder.